Black and hoppy as hell

Easy as one, two, three.

India Black Ale (IBA) sometimes called Cascadian Dark Ale (CDA) is very much like a India Pale Ale, but it contains black malt which makes the beer black. In all other aspects it is made the same way like an ordinary IPA, very much hops and flowery smell. The black malt is just enough to make the beer black, not more. The roasted malt brings some roasted tones which balances out with the bitterness and hop aroma in a good way.

This is the beer style I do best. I’m very proud of most of the ones I made so far which made me very critical about most of the other Black IPA’s I’ve tasted so far. Only one or two is better than the ones I make (yes I’m biased of course!).

It’s almost impossible to hide the roasted characters that the black malts normally produce, but with special techniques I tone it down more than I would want in a regular stout. I use insane amounts of hops so that the hop aroma will take over the roasted malts. The result is loads of hops with a hint of roastyness, the aroma is priceless. The classes of the Ninja beers is…

The wort and hop schedule of the Swedish Homebrewer Association in 2011. I brought 10 liters, and had about 3 liters left when the competition closed which meant very few people even dared tasting it. Those few brave who tasted it was surprised and voted for this beer, it came in 6’th place. 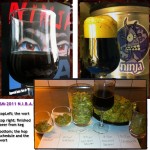 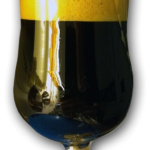 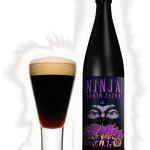 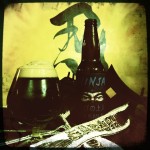