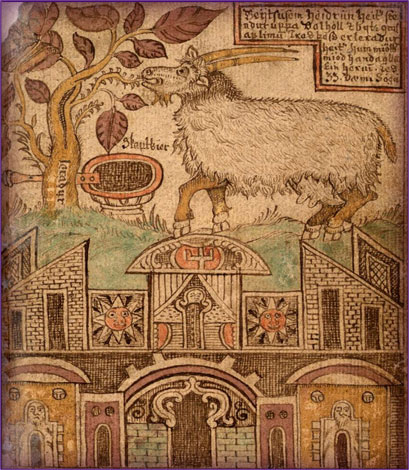 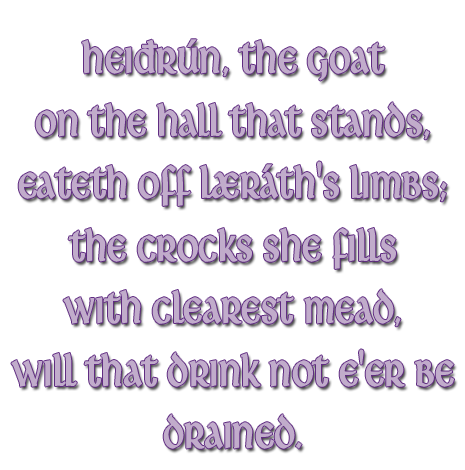 Heiðrún brewery is a very small kitchen brewery that makes small batches of craft brew in Stockholm, Sweden. I started brewing in March 2010 after an introduction course held by Monks Brewery. I had many names before deciding with Heiðrún. The name itself is quite ambitious, feeding whole Valhalla with beer! Well I’m allowed to dream, right :-D. Today you can’t even buy it in shops, but maybe in the future?

Heiðrún is a goat in Norse mythology, which consumes the foliage of the tree Læraðr and produces mead for the einherjar. She is described in the Poetic Edda and Prose Edda.

A goat called Heiðrún stands up [on its hind-legs] in Valhalla biting the buds off the branches of that very famous tree which is called Lærað. From her teats runs the mead with which every day she fills a cauldron, which is so big that all the Einherjar can drink their fill from it. – Young’s translation

Heithrún, the goat
on the hall that stands,
eateth off Læráth’s limbs;
the crocks she fills
with clearest mead,
will that drink not e’er be drained.
– LMH’s translation 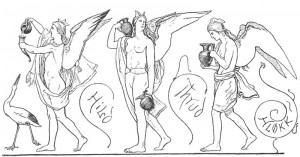 In Norse mythology, the einherjar (Old Norse “lone fighters”) are those that have died in battle and are brought to Valhalla by valkyries. In Valhalla, the einherjar eat their fill of the nightly-resurrecting beast Sæhrímnir, and are brought their fill of mead (from the udders of the goat Heiðrún) by valkyries. The einherjar prepare daily for the events of Ragnarök, when they will advance for an immense battle at the field of Vígríðr.

Scholarly theories have been proposed etymologically connecting the einherjar to the Harii (a Germanic tribe attested in the first century CE), the eternal battle of Hjaðningavíg, and the Wild Hunt. The einherjar have been the subject of works of art and poetry.

All einheriar shall swear oaths to thee:

share thou the Æsir’s ale, thou enemy-of-earls!
Here within hast thou brethren eight,’ said Bragi.

Most of this history is from Wikipedia, click here to read more about Heiðrún, Einherjar and Norse mythology